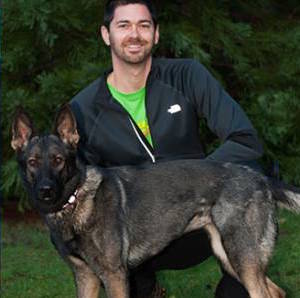 Gilly is a GSD (German Shepherd Dog), with East German and Czech blood lines that joined KCSD in 2015 and had her first mission find shortly after certifying in trailing. Gilly loves to search and almost drags 'long arm' Kris to his subjects. When Gilly isn't working she spends the days with her parents at work causing havoc by chewing on computer cords and barking at anyone new who walks through the door. Gilly enjoys using her nose to find people, backpacking and camping with her parents, chasing balls at the park for hours on end, eating raw food and anything dairy, and whining (if you have a GSD you understand). Never a man to slow down, Kris does double duty as KCSD treasurer in addition to his role as dog handler and father of two young girls.

WHAT we do | Airscent | Trailing | Specialty | Education

Call 911 if you have a search emergency